At the risk of further offending stockbrokers, there are enough of them who worry about their own commissions more than their clients’ welfare to be concerned when they advise a lot of sales without proper substantiation.

This letter from a client is typical of many that we will be seeing as the year comes to an end and the stockbrokers need to get their own numbers up.

Keep coming back to doing absolutely nothing in regard to what I am presenting to you.  But want to out fox Congress and Obama, I had planned to sell stock and take profits.  But recall, we sold and closed on our rent house and $46,000 profit without calculating 2009 expenses.  This rental profit may affect these stocks sales.

While there have been indications that Obama wants to raise long term capital gains (LTCG) tax rates as part of his twisted concept of "fairness," nothing has been done yet to change what we have for the next few years.  2010 rates are scheduled to be the same 15% max as they are for 2009.  If no new legislation is enacted before 2011, the LTCG rate is scheduled to rise to a 20% max for 2011 and beyond.

While I have seen a lot of people advising investors to sell off appreciated assets in 2009 and 2010 so they can avoid the higher rates in future years, I'm not a big fan of intentionally paying a lot of taxes sooner rather than later.

As I constantly have to remind people, any sane investment strategy should be based on the fundamental economic realities and not on tax aspects. This means that you should sell off stocks when they appear to have peaked in value and are close to dropping.

The other reason to sell prematurely would be if there is an alternative investment opportunity for the money you have tied up in stocks that will be much more profitable than you are currently earning, including enough extra to cover the taxes you would have to pay on the sale of the stocks.

I don't want to accuse your stockbroker of partaking in the time honored tradition commission based professionals have of churning your account simply to generate commissions, but it is smelling a lot like that to me.

If he has a new investment opportunity that he can guarantee will outperform the stocks you currently have, a wiser move would probably be to invest new money into some of that rather than selling off stocks that are still doing well.

While it has always been a truism to diversify investment portfolios and not keep all of your eggs in one basket, the stockbroker comments about this are a little too vague to give me any confidence that moving the money from the stocks to something else will be any better for anyone other than his commissions.

I don't have a crystal ball in regard to predicting future stock values; but I have developed a keen sense of smell for churning.  It may sound extremely cynical, but I have seen so many cases where clients' accounts have been literally wiped out by transaction costs that served no purpose other than to generate commissions for the stockbrokers that I wouldn't advise making any such trades until he can make a strong and valid case for the deal on its basic investment principles, regardless of the tax consequences.

Using vague and possibly nonexistent tax savings as the reasoning for a sale of stocks is another big danger sign that you are dealing with an incompetent or unscrupulous advisor.

This is obviously another one of my vague replies to your investment inquiries; but I hope you understand the gist of my philosophy in regard to this kind of thing and it is of some help to you.

Let me know if you have any other specific questions or ideas you want to discuss.

Explaining the Stock Market?
One of my many long held pet peeves about the main-stream drive-by media has been how they report changes in the stock market. They look around for some other usually completely unrelated news event and claim that was the cause for the market's rise or decline.

Just like OwlGore and his idiotic global warming movie, the media can't tell the difference between coincidence and causation. 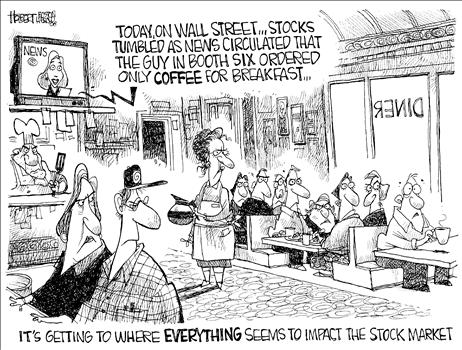 Stocks are not for the faint of heart...