Servants to Slaves
Does anyone else long for the time when our elected officials were considered servants of the people, working for the public's best interest? What we have obviously evolved into is the opposite situation. The elected elite have become unaccountable royalty and we are their slaves in more and more ways every day.


From an obviously new reader:

Dude, you are so full of it. You waste your time making fun of our next president - Obama - but are so blind to the ruins made by the republican party and their war agenda. The man is brilliant. Stop and listen, you might just learn something. You and your red neck followers have no clue what goes on around America and just want to line your pockets with more cash at the expense of hard working families and the poor. Whine Whine Whine about taxes. You really don't care about helping people do you? Can't see past your capitalistic raciest views. Do you even know about the social issues this country faces? Guru, my ass. Stop criticizing and come up with some real solutions (blogs, cartoons, etc...whatever) people over 8 yrs old can discuss and articulate on. Don't you know that all you do is spread hate and create division between people through your blog. Show some wisdom and professionalism in your work. You have no appreciation for the different opinions people have and the beliefs they stand for. So out of touch with reality, that even your portray of yourself is a cartoon.

From: (Name Removed By Request)

I'm sorry if telling the truth about your Messiah's tax plans offends you and your fellow Marxists. You should avoid my websites in the future, as I will continue to discuss what he has in store for us.

Your idiotic and ignorant comments aside, I do appreciate your writing to let me know that what I am posting on my tiny little blog is touching a nerve with you Obama disciples. That encourages me to continue.


Sarah and Todd Palin have released copies of their 2006 and 2007 income tax returns, which you can download from the McCain website.

I took a quick glance at the returns and had just a few comments.

I found it interesting that for both years, they had them prepared by H&R Block rather than by an expensive tax attorney or CPA, and that they e-filed.  I guess that is another part of the Palins’ bond with Joe SixPack.  I wonder if that will still be the case if she becomes VP.

Copies of their W-2s are also included.

Some of the numbers, such as non-cash donations and vehicle miles, end in double zeroes, a sign of the SWAG method of guesstimating.

There are already stories all over the internet on how much more the Palins deducted for charitable donations than the other candidates. I don’t feel like piling on to that right now, and may discuss my opinions on that issue at a later time.

For those even more curious about the Palins finances, the financial disclosure form on the McCain website lists many of their investments and other assets.


For those who like to take a peek at what are normally private documents concerning celebrities, the Obama campaign has released this PDF file with copies of the Obamas’ 2000 through 2006 income tax returns.  The file is over 67 mb in size and contains 103 pages.  I just skimmed through some of them and will leave it to others with more time on their hands to provide more detailed analyses.  What may be interesting to those who are already sick and tired of Michelle Obama’s attempts to portray herself as being poor and financially struggling are the AGI figures on these tax returns:

Thanks to Byron York at NRO for the link to this.

Of course, nobody is holding their breath waiting for a similar disclosure from the Clintons.  The latest I recall on this topic was a promise to release copies of their past tax returns after they have moved back into the White House, when it’s obviously too late to have any effect on the election.  Knowing how the Clinton Family works, I’m actually expecting an earlier release, but with most of the details left out such as back up schedules identifying sources of income.  It would also be in their character to have a set of innocent looking dummy tax returns prepared for public consumption.  It would be illegal for anyone in the IRS or their tax preparer’s office to publicly dispute the authenticity of the released documents.

In all fairness, while these appear to be legitimate, there’s no real way of telling if these copies of the Obamas’ tax returns are exact replicas of what they actually sent to IRS.  They are still relatively new on the national political scene and the levels of their dishonesty are just beginning to be revealed to those of us outside of Chicagoland.

Attack of the Insane AMT... 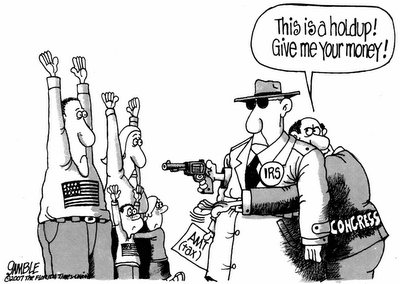 It's no surprise that the DemonRats have more Marxist plans for dealing with the AMT problem. 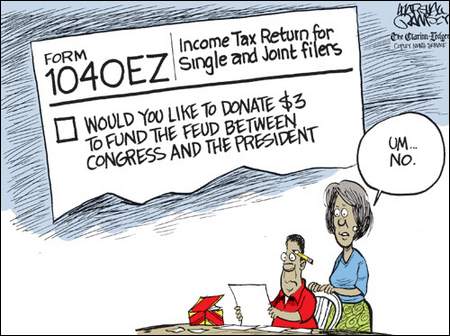